On Nov 12th, 2007, Google releases Android SDK and a complete tutorial. Android, licensed under the Apache license, is a fully integrated mobile platform of a Linux operating system, middleware, widgets set and applications.

Few features to be noticed:

1. Android SDK can be run in Windows, OSX(Mac), Linux

2. Develop in Java on Eclipse with its Eclipse plugin

3. Emulator comes with SDK for debug and application development

4. Documentation and tutorial are complete and really helpfull

The ZK Mobile for Android is the ZK extension that enables richness of ZK applications to Android platform mobile devices with little programming. With the event-driven components and a markup language on server side, developing is as simple as programming desktops and authoring HTML. No Android prerequisite is required. The architecture of the ZK Mobile Computing for Android is as follows, 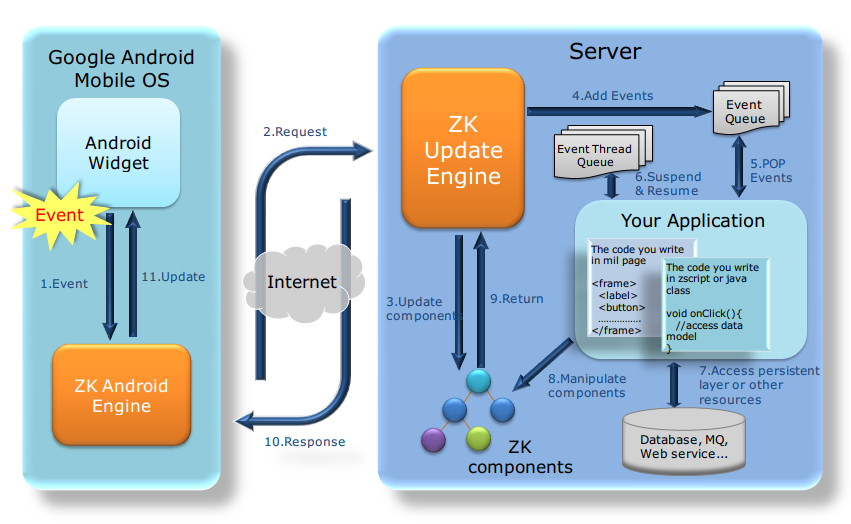 With ZK's server-centric architecture, developing Android application becomes a very easy task. ZK mobile developers only need to write MIL (Mobile Interactive Language) files in ZK tags without understanding Android SDK detailly. MIL is a markup language that enables developers to author a page without programming. Also, due to the tendency of server-centric framework - application runs on server, developers don't need to re-deploy applications when applications update occurs and the business logic is controlled in server side. As soon as the application installed at the server is upgraded, the user will access the most updated version automatically. Moreover, the business logic is running at the server, so it requires much less memory in the mobile device.

ZK with Android in Action

Next, we implement a twitter application to demonstrate how easy developing ZK Android application can be.

1. Installing Android SDK, refer to installing the SDK 2. Installing the Android Eclipse Plugin (ADT), refer to Installing the Eclipse Plugin (ADT) 3. Download twitter.war and deploy it to Tomcat and then start the Tomcat 4. Download zkgphone.zip and extract it to a folder 5. In Eclipse, click on 'File', select Import.../General/Existing Projects into Workspace. Hit the browse button, and navigate to where you placed the extracted folder, select zkgphone and click OK.. 6. Run zkgphone and use the url of the depoyed twitter application(EX: http://10.1.3.56:8080/twitter/index.mil). To run Android application in Eclipse, please refer to here