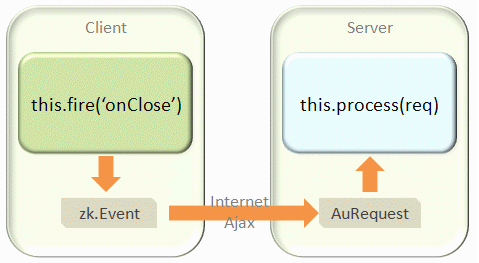 A widget event (Event) is converted to an AU request and then sent to the server. When the event arrives at the server, it is converted to be an instance of AuRequest), and then pass to the desktop for serving by invoking DesktopCtrl.service(AuRequest, boolean). If the request is targeting a component, the component's ComponentCtrl.service(AuRequest, boolean) will then be called to serve it.

Thus, if you implement a component, you could override ComponentCtrl.service(AuRequest, boolean) to handle it.

Here is an example (from Radio):

Since all requests will be passed through AuService that you plug, the performance of the implementation should be good. In addition, this method should return true if it has been processed to avoid any further processing.

To plug it to the desktop, you could implement a listener of DesktopInit to add it to a desktop by Desktop.addListener(Object). Then, specify the listener to WEB-INF/zk.xml. For example,

To plug it to the component, you could invoke Component.setAuService(AuService).

As described in the previous section, a widget event (Event) will be sent to the server, only if the server needs it.

To declare an event that a server might need it, you have to invoke AbstractComponent.addClientEvent(Class, String, int). It is a static method and usually called in a static clause as shown below.

Once declared, an event will be sent to the server if one of the following conditions is satisfied:

These events are called important events. You could declare an event as important by specifying ComponentCtrl.CE_IMPORTANT as follows.

Notice that the important event won't be sent to the server immediately if it does not have any non-deferrable event listener at the server[1].

Force Event to Send Back

AbstractComponent.addClientEvent(Class, String, int) is usually used by a component developer since the first argument must be the component's class. For application developers, it is more straightforward by specifying the toServer option in Event.opts when instantiating an event. For example,