A imagemap component is a special image. It accepts whatever properties an imagecomponent accepts. However, unlike image, if a user clicks on the image, an onClick event is sent back to the server with the coordinates of the mouse position. In contrast, the onClick event sent by image doesn't contain the coordinates.

Note: Don't try to use CSS background as your image, the image map need a real image or it won't work.

For example, if a user clicks 208 pixels over and 205 pixels down from the upper-left corner of the image displayed from the following statement, then the user gets the result as depicted below. 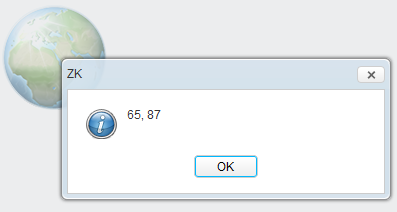