This article is out of date, please refer to zk-mvvm-book/8.0/introduction_of_mvvm for more up to date information.

MVVM[1] is an abbreviation of a design pattern named Model-View-ViewModel which originated from Microsoft.[2] It is a specialization of Presentation Model[3] introduced by Martin Fowler, a variant of the famous MVC pattern. This pattern has 3 roles: View, Model, and ViewModel. The View and Model plays the same roles as they do in MVC.

The ViewModel in MVVM acts like a special Controller for the View which is responsible for exposing data from the Model to the View and for providing required action and logic for user requests from the View. The ViewModel is type of View abstraction, which contains a View's state and behavior. But ViewModel should contain no reference to UI components and knows nothing about View's visual elements. Hence there is a clear separation between View and ViewModel, this is also the key characteristics of MVVM pattern. From another angle, it can also be said that the View layer is like an UI projection of the ViewModel.

Separation of data and logic from presentation

The key feature is that ViewModel knows nothing about View's visual elements guarantees the one way dependency from View to the ViewModel thus avoiding mutual programming ripple effects between UI and the ViewModel. Consequently, it brings the following advantages:

Since the ViewModel contains no reference to UI components, it needs a mechanism to synchronize data between the View and ViewModel. Additionally, this mechanism has to accept the user request from the View layer and bridge the request to the action and logic provided by the ViewModel layer. This mechanism, the kernel part of the MVVM design pattern, is either data synchronising codes written by the application developers themselves or a data binding system provided by the framework. ZK 6 provides a data binding mechanism called ZK Bind to be the infrastructure of the MVVM design pattern and the binder [5]plays the key role to operate the whole mechanism. The binder is like a broker and responsible for communication between View and ViewModel.

Here we use a simple scenario to explain how MVVM works in ZK. Assume that a user click a button then "Hello World" text appears. The flow is as follows: 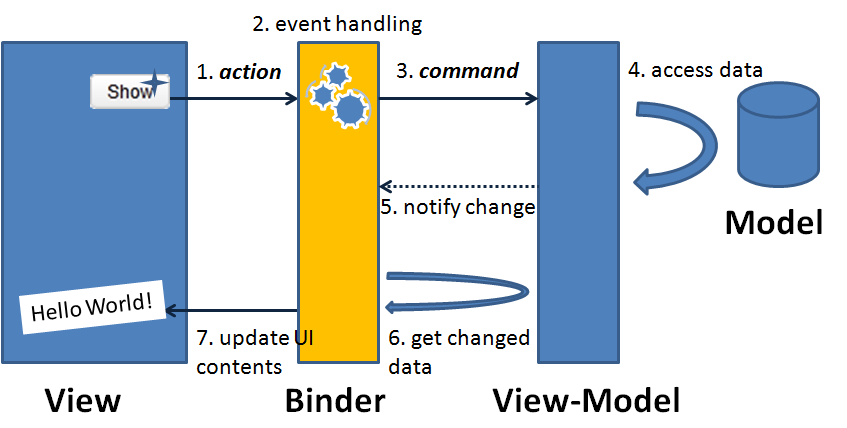 As stated in the paragraph earlier, the binder synchronizes data between UI and ViewModel.