It is common to decompose a visual presentation into several subsets or ZUML pages. For example, you may use a page to display a purchase order, and a modal dialog to enter the payment term. If all components are uniquely identifiable in the same desktop, developers have to maintain the uniqueness of all identifiers for all pages that might create in the same desktop. This step can be tedious, if not impossible, for a sophisticated application.

Window (Window) is a typical component that is an ID space. All descendant components of a window (including the window itself) form an independent ID space. Thus, you could use a window as the topmost component to group components. This way developers only need to maintain the uniqueness of each subset separately.

By and large, every component can form an ID space as long as it implements IdSpace. This type of component is called the space owner of the ID space after the component is formed. Components in the same ID space are called "fellows".

When a page implements IdSpace, it becomes a space owner. In additions, the macro component and the include component (Include) can also be space owners.

Another example is idspace (Idspace). It derives from div, and is the simplest component implementing IdSpace. If you don't need any feature of window, you could use idspace instead.

You could make a standard component as a space owner by extending it to implement IdSpace. For example,

will form ID spaces as follows: 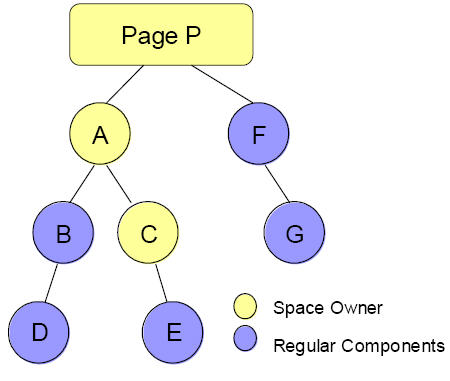 As depicted in the figure, there are three spaces: P, A and C. Space P includes P, A, F and G. Space A includes A, B, C and D. Space C includes C and E.

With ZK Developer's Reference/MVC, you generally don't need to look up fellows manually. Rather, they could be wired automatically by using the auto-wiring feature of a composer. For example,

Then, you could associate this composer to a component by specifying the apply attribute as shown below.

Once the ZUML document above is rendered, an instance of MyComposer will be instantiated and the input member will also be initialized with the fellow named input. This process is called "auto-wiring". For more information, please refer to the Wire Components section.

ZK provides a utility class called Path to simplify the location of a component among ID spaces. The way of using it is similar to java.io.File. For example,

The formal syntax of the paths

If a component belongs to another page, we can retrieve it by starting with the page's ID. Notice that double slashes have to be specified in front of the page's ID.

Notice that the page's ID can be assigned with the use of the page directive as follows.

A component has another identifier called UUID (Universal Unique ID). It is assigned automatically when the component is attached to a page. UUID of a component is unique in the whole desktop (if it is attached).