Platform as a service (PaaS[1]) is a kind of cloud computing service that provides a computing platform and a solution stack as a service. Instead of hosting and maintaining server by themselves, many companies start to take advantage of PaaS services as the offerings are extensive and includes the whole cycle of application hosting, development, testing, and deployment environment, along with a complete options of integrated services that consist of scalability, maintenance, and more. Here we will introduce how to deploy ZK applications on two popular PaaS platforms - Heroku and OpenShift Express.

Traditionally the "standard way" to deploy an application to a cloud, is to package a war file and then upload it to the cloud. Whenever there is a change, we will have to update the war file locally again, and then re-upload the file. Heroku and OpenShift, however, both integrated Maven and GitHub, offering the ability to remotely control source code versions. Users can build and manage their projects using Maven, and push their source code to the cloud service via GitHub and build the project on cloud automatically.

The flow chart is as simple as follows: 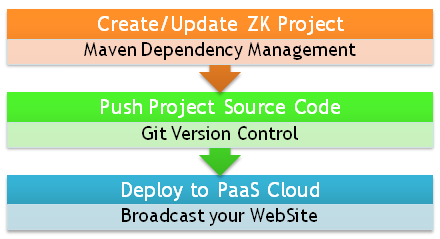 For more details on running ZK on Heroku, please refer to the Installation Guide.

For more details on running ZK on OpenShift, please refer to the Installation Guide.

Let's see more detailed features of Heroku and OpenShift with the table below:

From the table above you can find that both of them allow simple Maven + Git approach but each platform supports a different set of containers and databases.

Whether to use Heroku or OpenShift or a different PaaS solution depends on your needs and preferences but these options are available and surely benefits in enabling application developers to focus more on the project itself rather than worrying about deployment issues.