Practices Of Using CDI In ZK

In previous article: Starting A Web Application Based On ZK CDI JPA and Jetty, I introduced the configuration and an application stack which is development friendly. In this article, I want to go through our demo project to show you the programming practices and solutions for common scenarios.

About the Demo Application 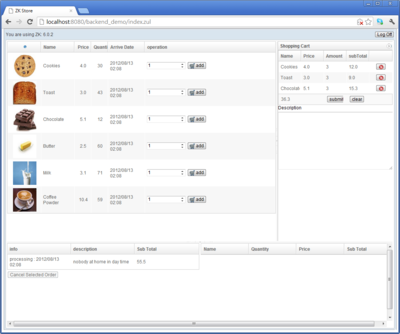 This demo consists of 4 parts:

Entity Beans of This Application

In this demo application we have several entity beans all under package demo.model.bean

In the last section of previous article, we know how to define and get an Entity Manager instance in Java program:

Although getting an Entity Manager using programmatic approach is quite easy, we'd much prefer to use CDI's context injection ability to inject entity manager instance when needed. The sample code of our Data Access Object which requires an Entity manager might looks like this:

And now we have a problem, Entity Manager is not a CDI managed bean, which means CDI container doesn't know how to instantiate it, so how to make this work? Or more precisely, how to ask CDI to create an EntityManager from corresponding persistence unit and inject it to all needed managed beans?

For beans that are already predefined and not designed as a managed bean presumably, CDI provids a solution named producer. Let's take a look at the sample code below to see how producer works:

In the code above, we have our EMFProducer being tagged with @Singleton which means there's only one instance of this class in CDI container. Then we have the produceEntityManager() method being annotated with @produces java annotation which tells CDI container that this is a producer method. Now, for any managed bean who requires an Entity Manager injection (such as the OrderDAO sample above), CDI container will call this producer method according to the given scope @RequestScoped and inject the result into the managed bean.

Data Access Object is designed to work with entity beans, normally it is better to be request scope object. Here is the way to do it in CDI:

Logic Layer is a layer for business objects of this demo, in this demo application, all object about this layer has been put in package demo.web.model.

In this demo application, we have several main business objects which provides a set of logical API to interact with view. They are:

Let's use them to see how to design your business object in some common scenario.

In demo.web.model.ProductManager, as the scenario here is to provide a list of available products for view to display, the code is very simple:

We give a @Named annotation which will tell CDI the bean name of ProductManager, then we set the scope of our ProductManager to be @ApplicationScoped as product manager is generic to every user.

Though our ProductManager is application scoped, the ProductDAO which CDI injected is RequestScoped, this causes a scope inconsistent problem and needs to be solved.

As figure shown above, to deal with this inconsistency, during injection, CDI created a proxy object which wrapped some code that will get correct instance of ProductDAO according to request scope .

In web logical layer design, a business object which needs to keep state across multiple requests should be stored in session. In CDI, you can annotate a managed bean with @SessionScoped to make sure requests belongs to one session will access the same instance.

To identify if a managed bean should be session scoped or not, you can check if it contains unmanaged bean member fields. Normally a bean contains member fields which have a strong flavor of current user state could be session scoped, for example in our demo application while user try to request http://localhost:8080/backend_demo/index.zul we need to check if current user is authenticated. if not, well redirect him to login.zul for login process:

In order to do this, I designed demo.web.model.UserCredentialManager which is a session object maintaining the state of user credential:

As you can see above, the UserCredentialManager has a login(name, password) method and stored a User bean inside. Here's one thing to be careful, in CDI, a session scoped object needs to be Serializable otherwise CDI will throw exception while parsing bean. To bean's member field, except managed bean(ex: UserDAO) every member field needs to be Serializable or with keyword transient .

You can also inject BO into another BO, for example, in demo.web.model.UserOrderManager we need userCredentialManager to get current user:

This layer is about how to use BO in ZK's view, the java classes that controlling zk views are all under demo.web.ui.ctrl. In this application we demonstrate how to use CDI bean in ZK MVC controller in:

and how to use CDI bean in ZK MVVM in:

In the login process example above, we have a WorkbenchInit declared in index.zul, let's see how to get managed bean in ZK's listener such as org.zkoss.zk.ui.util.Initiator.

In ZK, we have a bunch of Listeners that you can do some interception or flow control. To get CDI managed bean from them, the easist way is to construct a new DelegatingVariableResolver instance:

As illustrated above, we can get our session object userCredentialManager by calling resolveVariable(String) through DelegatingVariableResolver in an Initiator.

In Listener scenario we use a programmatic approach to get managed bean. In ZK MVC controller, we can use annotations for variable wiring to save coding effort. For example, in demo.web.ui.ctrl.LoginViewCtrl:

We use @VariableResolver(org.zkoss.zkplus.cdi.DelegatingVariableResolver.class) to annotate LoginViewCtrl which tells super class: SelectorComposer that this controller will based on CDI context to do variable wiring. Then in the member field declaration part, we can use @WireVariable to wire UserCredentialManager. As you can see, by default if the field's name is the name of that CDI bean, the instance will be wired automatically.

In ZK MVVM, the way to do variable wiring is very similar to ZK MVC, let's use demo.web.ui.ctrl.OrderViewViewModel for example:

We reuse @VariableResolver and @WireVariable annotations here, which makes our View Model object becomes very clean to both ZK view and data.

By now(ZK 6.0.2) ZK's Variable Resolving approach can only work with named beans in CDI. If your CDI beans are based on Alternative or Producer you'll have to add an adoption layer(a facade or something) to make them accessible with Variable Resolver.