A window is similar to a HTML DIV tag and is used to group components. Unlike other components, a window has the following characteristics:

You are also able to specify a label and an image within a caption, and then the appearance is as follows.

By setting the closable attribute to true, a close button is shown for the window, which enables a to close the window by clicking the button. Once user clicks on the close button, an onClose event is sent to the window which is processed by the onClose method of the Window component. Then, onClose, by default, detaches the window itself.

You can override it to do whatever you want. Or, you can register your own listener to change the default behavior. For example, you might choose to hide the window rather than close it.

Notice that event.stopPropagation() must be called to prevent Window.onClose() being called.

Tip: If the window is a popup, the onOpen event will be sent to the window with open=false, when the popup is closed due to the user clicking outside of the window, or pressing ESC.

The onClose is sent to ask the server to detach or to hide the window. By default, the window is detached. Of course, the application can override this behaviour and do whatever it wants as described above.

On the other hand, onOpen is a notification. It is sent to notify the application that the client has hidden the window. The application cannot prevent it from hiding, or change the behavior to be detached.

If you allow users to resize the window, you can set the sizable attribute to true as follows.

Once allowed, users can resize the window by dragging the borders.

Note: If the user drags the upper or left border, the onMove event is also sent since the position has changed, too.

You can customize the look and feel of window』s content block by specifying the contentStyle property.

A typical use of the contentStyle attribute is to make a window scrollable as follows.

The border attribute specifies whether to display a border for window. The default style sheets support only normal and none. The default value is none.

Of course, you can provide an additional style class. For example,

wc-embedded-dash defines the style of the inner box of the window. The style class is named by concatenating wc[1], the sclass property and the border property together and separating them with dash (-). In this example, sclass is embedded since it is an embedded window and no explicit sclass is assigned (so the default sclass is used).

A window could be in one of five different modes: overlap, popup, modal, highlighted and embedded. The default mode is the embedded mode. You can change the mode by use of the doOverlapped, doPopup, doModal, doHighlighted, and doEmbedded methods, depicted as follows.

An embedded window is placed in line with other components. In this mode, you cannot change its position, since the position is decided by the browser.

An overlapped window can be overlapped by other components, such that users are able to drag it around and the developer can set its position using setLeft and setTop methods.

In addition to doOverlapped, you can use the mode property as follows.

A popup window is similar to overlapped windows, except it is automatically closed when user clicks on any component other than the popup window itself or any of its descendants. As its』 name suggests, it is designed to implement popup windows.

A modal window (aka. a modal dialog) is similar to overlapped windows, except it suspends the execution until one of the endModal, doEmbedded, doOverlapped, doHighlighted, or doPopup methods is called.

In addition to suspending the execution, it disables components not belonging to the modal window.

A modal window is positioned automatically at the center of the browser, so you cannot control its position.

However, it does not suspend the execution. Like the overlapped windows, the execution continues to the next statement once the mode is changed. For example, f1() is called only after win1 is closed, while g() is called immediately after win2 becomes highlighted.

The highlighted window is aimed to substitute the modal window, if you prefer not to use or suspend the event processing thread. Refer to the Use the Servlet Thread to Process Events section in the Advanced Features chapter.

Unlike other modes, you can only put a window in modal mode in an event listener. This mean, you can only invoke doModal() or setMode("modal") in an event listener. In another words, modal windows can only be displayed on some event for eg. onClick of button or onSelect of Listbox. You can not show a modal Window when the ZUL page is rendered. (You can do it via a technique demonstrated in t3.zul as shown below)

In above sample, the wnd Window initially is invisible. However clicking on do it Button will open wnd Window as a Modal dialog.

On the other hand, the following is wrong if it executes in the Component Creation Phase[2].

Below is expected result of t1.zul after opening it in browser 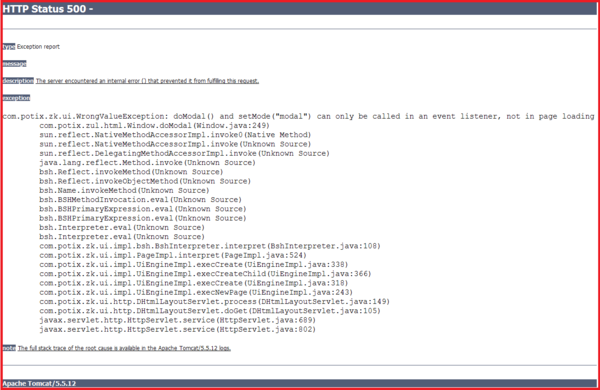 It will cause the following result[3] if you directly go to it.

The following code will cause the same result.

If you need to create a modal window in the page loading event, you can post the onModal event as follows.

Note: the following codes execute correctly even if t1.zul sets the window's mode to modal directly (as shown above). Why? It executes in an event listener (for onClick).

In addition to the left and top properties, you can control the position of an overlapped/popup/modal window by use of the position attribute. For example, the following code snippet positions the window to the right-bottom corner.

The value of the position attribute can be a combination of the following constants by separating them with comma (,).