Each UI object is represented by a component (Component). Thus, composing an UI object is like assembling components. To alter UI one has to modify the states and relationships of components.

For example, as shown below, we declared a Window component, enabling the border property to normal and setting its width to a definite 250 pixels. Enclosed in the Window component are two Button components.

As shown above, there are two ways to declare UI: XML-based approach and pure-Java approach. You can mix them if you like.

Forest of Trees of Components

Like in a tree structure, a component has at most one parent, while it might have multiple children.

A component without any parents is called a root component. Each page is allowed to have multiple root components, even though this does not happen very often.

Notice that if you are using ZUML, there is an XML limitation, which means that only one document root is allowed. To specify multiple roots, you have to enclose the root components with the zk tag. zk tag is a special tag that does not create components. For example,

Most of the collections returned by a component, such as Component.getChildren(), are live structures. It means that you can add, remove or clear a child by manipulating the returned list directly. For example, to detach all children, you could do it in one statement:

It is equivalent to

Note that the following code will never work because it would cause ConcurrentModificationException.

The following statement will fail for sure because the list is live and a component will be detached first before we move it to different location.

More precisely, a component has at most one parent and it has only one spot in the list of children. It means, the list is actually a set (no duplicate elements allowed). On the other hand, Collections.sort() cannot handle a set correctly.

Thus, we have to copy the list to another list or array and then sort it. Components.sort(List, Comparator) is a utility to simplify the job.

A page (Page) is a collection of components. It represents a portion of the browser window. Only components attached to a page are available at the client. They are removed when they are detached from a page.

A desktop (Desktop) is a collection of pages. It represents a browser window (a tab or a frame of the browser)[1]. You might image a desktop representing an independent HTTP request. 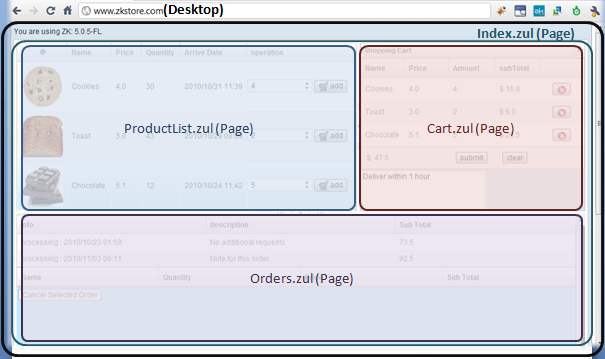 A desktop is also a logic scope that an application can access in a request. Each time a request is sent from the client, it is associated with the desktop it belongs. The request is passed to DesktopCtrl.service(AuRequest, boolean) and then forwarded to ComponentCtrl.service(AuRequest, boolean). This also means that the application can not access components in multiple desktops at the same time.

Both a desktop and a page can be created automatically when ZK Loader loads a ZUML page or calls a richlet (Richlet.service(Page)). The second page is created when the Include component includes another page with the defer mode. For example, two pages will be created if the following is visited:

Notice that if the mode is not specified (i.e., the instant mode), Include will not be able to create a new page. Rather, it will append all components created by another.zul as its own child components. For example,

is equivalent to the following (except div is not a space owner, see below)

Attach a Component to a Page

A component is a POJO object. If you do not have any reference to it, it will be recycled when JVM starts garbage collection.

There are two ways to attach a component to a page:

Since a component can have at most one parent and be attached at most one page, it will be detached automatically from the previous parent or page when it is attached to another component or page. For example, b will be a child of win2 and win1 has no child at the end.

Detach a Component from a Page

There are only a few reasons to invalidate a component, but it is still worthwhile to note them down:

Don't Cache Components Attached to a Page in Static Fields

As described above, a desktop is a logical scope which can be accessed by the application when serving a request. In other words, the application cannot detach a component from one desktop to another desktop. This typically happens when you cache a component accidentally.

For example, the following code will cause an exception if it is loaded multiple times.

and foo.Foo is defined as follows[1].

The exception is similar to the following:

All components are cloneable (java.lang.Cloneable). It is simple to replicate components by invoking Component.clone().